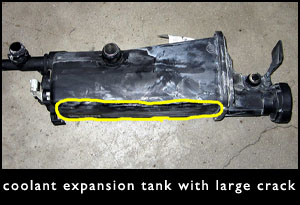 The cooling system is a critical part of the engine but is mostly over looked for servicing until a component breaks or leaves you stranded.

Antifreeze/coolant breaks down over time and needs to be replaced. The results of not servicing the system can be disastrous, especially here in the desert.

The antifreeze/coolant must handle temperatures around 250 degrees without boiling (water boils at 212 degrees) and protect from freezing to below 50 degrees. A lot is expected from this liquid. 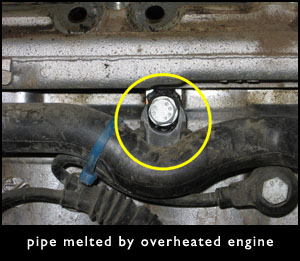 There are many more components in the cooling system that need to be inspected also. Hose, fan, radiator, cap just to name a few. Any one that if they fail can cause you to have a bad day.

The cooling system should be serviced according to the manufactures time lines, and it’s components inspected at every service.

The following is a case in which a customer’s car cooling fan failed, on a hot day and the person thought they could make it home.

In picture 1 you see the coolant expansion tank with a large crack; this is from the cooling system getting very hot and the pressures increasing to the point of causing this crack and all the coolant escaping from the system. Without the coolant in the engine, it started to overheat extremely fast.

In picture 2 you see a plastic pipe running alongside the engine block, the block got so hot that it started to melt the plastic pieces connected to it.

This engine was destroyed, it could have been saved if the car was shut off at the first sign of trouble, but all this damaged happened in 5 minutes. So much for thinking it could make it home. 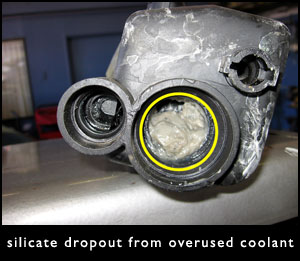 But if you look at picture 3, this car had another problem going on. That white goo is the silicate in the coolant. That is called silicate dropout, it happens when the antifreeze/coolant has been used beyond it life expectancy and the additives break down. This goo would have ended up plugging the system, plus the silicate is part of the corrosion inhibitor package. If the fan didn’t fail on this car, the lack of maintenance on the cooling system was going to cause a major problem in the near future.

Needless to say this car got and engine and ALL the cooling system components, metal rubber and plastic.

Bottom line: maintaining the cooling system is a lot cheaper in the long run than it is replacing engines. 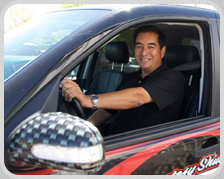 Like most people, I don’t enjoy performing vehicle maintenance and even less having to pay for it, but it is essential to maintain properly running vehicles. I found my experience with European Auto exceptional and first-class, they provided outstanding service, are well organized, friendly and would recommend them.

…John has been very kind with many details explained to me and my wife about the repairs. We also met Larry at he garage and shared our stories of trips through America. Very nice people to meet in Tucson! Shop Rating: Excellent

My car seems to be working great… You found the issues and didn’t try to talk us into anything we didn’t need or want done. We had a great experience with this repair so far. Very informative and we knew every job that the mechanic was doing because of the estimate that was given. We will return if the need strides.